We’re using UCSF Profiles data to explore whether co-authorship networks are a good way to show the connections between researchers at UCSF.

We can start off by looking at immediate co-authorship connections. I was surprised at how few current UCSF co-authors most users have. The flip side of co-authoring widely outside of one’s institution is that there are fewer internal co-authors:

The numbers jump when you go one degree further out, though the relative proportions are similar:

The numbers grow further when we count first, second, and third degree coauthors. 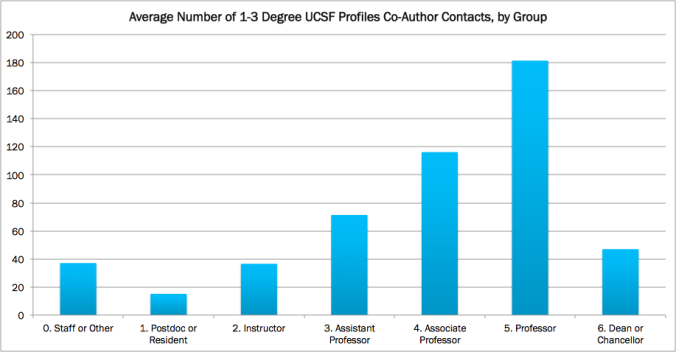 My big takeaways are unsurprising:

One thought on “UCSF Profiles coauthorship networks, by degree”

We are a technology, communications and research facilitation group, writing about how web and other emerging technologies can foster collaboration and communication to accelerate biomedical research. Learn more...

Powered by CTSI at UCSF